With decades of marketing, strategy, and unmatched AR experience, we help enterprise clients break through and accelerate growth

What You Missed from the Enterprise Wearable Technology Summit (EWTS) 2019

Last week in Dallas was the largest EWTS event by far, bringing together the "who’s who" of AR enterprise users and solution providers. Having only missed the 1st year, it’s amazing for me to witness the year after year progress – and the BrainXchange team never disappoints – curating the best possible program.  Here's a look at who was (and wasn't) there, what was new and notable, and our list of the EWTS 2019 Top 10.

The perennial regulars were all there - the weathered, leathered, pioneers and evangelists. That is not a critique, as I’m one of them. These are the people working tirelessly to move AR into ubiquity - and when (not "if") successful, each will be essential footnotes in the industry, while the fresh-faced newbies come flooding in as the AR profits flow like water. I can’t wait. These included the extremely important long term enterprise AR users, like AGCO, Boeing, Ford, Duke, Pfizer, Accenture, etc.  Most of whom were on the EWTS stage speaking my language: AR user efficacy, use case proliferation, and iterative programs to deploy today’s tech while vetting AR next gen in their innovation labs. These industry vets also included the core AR/VR hardware manufacturers like RealWear, Vuzix, Epson, Toshiba, Iristick, HTC, and more. The core AR software solution providers like Upskill, Ubimax, PTC, AMA, Atheer, Reflekt, Proceedix, Librestream, and ScopeAR were all drawing crowds. Probably the best indication that AR is a maturing and (nearly) profitable industry was that few if any were launching new products, or new bells and whistles. Rather, they were showing fresh new corporate logos, announcing new user case studies, and showing videos of real scaled production deployments. This created a sense of urgency among the enterprise attendees that was palpable.

I’m not going to harp on those that didn’t survive to make this year’s show, but notable are the perennial no-shows like Microsoft and Google.  This matters because: if they would participate openly in our industry, it would lift the tide for all, and they might actually learn from the people who want to use their products. And there were others that might not have exhibited, but were actively walking the floor like Picavi, Crunchfish, Mira, and Honeywell – EWTS was a tough ticket this year!

As far as VR, I only saw few headsets and VR content providers at EWTS; however, there’s a huge demand across all industries for training and learning – and these departments always have budget. It was probably the most common near term solution request we heard from the EWTS attendees. More on this in an upcoming blog, but the use of VR in training, and the content that would drive that naturally can be re-used on AR headsets in the field for continuous training e.g. work instructions and on the shoulder mentor help.

WHO WAS NEW TO THE SHOW:

From an enterprise user attendee basis, the pharma, defense, energy, and aerospace industries seemed to have the biggest attendance spike - while manufacturing and logistics remained about the same from last year. A handful of new to EWTS software solutions providers like Hodei-Tech, TeamViewer, Jujotech, 42Gears, and TsunamiXR were nestled in larger company booths. The most exciting newcomers were on the hardware side. Nreal was in attendance for the first time, while Magic Leap’s new Enterprise division was a very welcome addition. TBD if their hardware can make it out of the training classroom and onto the production floor, but if I were a betting man, I’d say they are gathering enterprise feedback for next gen hardware specific to the enterprise use case. ThirdEye had production versions of their X2, Vuzix announced that the production M400’s are shipping, and Iristick announced iOS compatibility – but none of that is really new.  Most intriguing new hardware entrant by far was Bose – who’s already in market ‘glasses’ (really just "hearables" e.g. no camera or display) are OK, but sprinkle in Bose’s audio leadership on a pair of glasses with a camera and maybe even a display (like some of the prototypes they showed), and I can guarantee new use cases and improved ROI.

First let me tell you who won’t be on this list: the vendors and presenters who spent the audience’s valuable time discussing the basic concepts of AR use cases, the ROI of remote support, or why you should consider piloting mobile AR for the workforce. This isn’t 2015, and we all have Google. The attending companies spent $10k or more just to send their people to EWTS – they could have just bought a POV or POC (we don’t use the word 'pilot" around here). Yes, we all need to fill the top of our lead funnel, but that is what digital marketing is for – and if you need help you know where to find me. And don’t get me started on the presenters showing CGI of amazing things that HoloLens 2 "might" do someday. The AR industry is beyond that. This EWTS crowd was there for 1 reason – to enable their organizations to properly deploy AR to drive operational improvement and business advantage.  The attendees were not asking vendors ‘what do you do?’, but rather ‘how can we do it?’  How to align internally to deploy their first AR use case, how to scale globally, and how to proliferate use cases to drive true transformation. In other words, how to deploy AR at scale - now that is speaking my language. And companies that answered this are the ones that made our rankings of best in show.

These are the people who made my EWTS Top-10 (in no particular order): Follow us on social and subscribe to this blog to get the real deal on the Augmented Reality industry, and if there is a large gap between posts, please forgive us, we’re probably stuck on a plant floor deploying devices on heads and engineering new AR processes. To learn more about Lance-AR's service offerings, view or download our brochure below.
Next stop for us: xRS Week Oct 16-18 in San Francisco www.xRSweek.com

Click the image below for a full-sized view of our services: 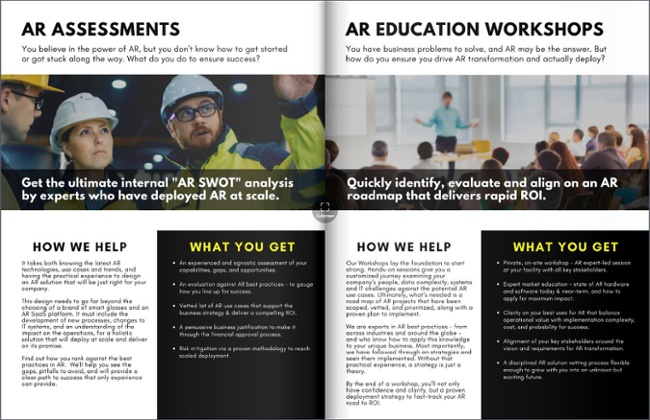 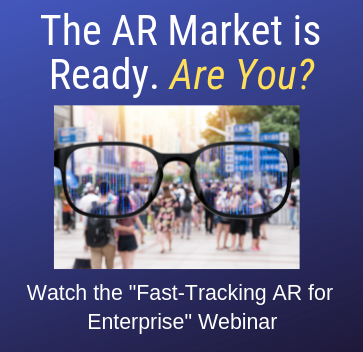